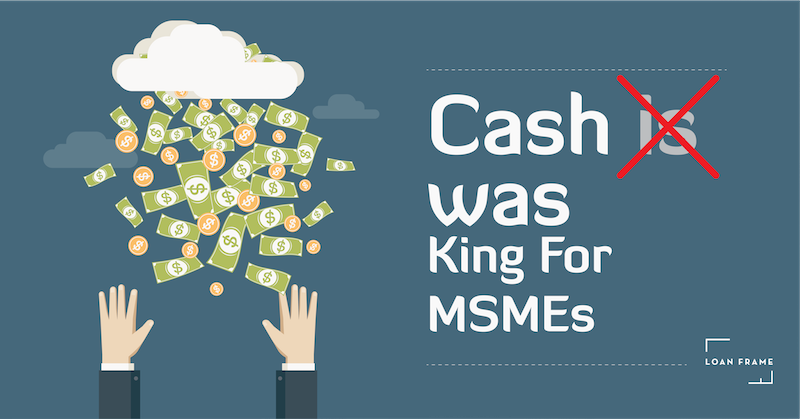 India Inc.’s dependence on cash has traditionally been high, especially with MSMEs. A radical policy move like demonetisation has however compelled small businesses to consider alternatives to cash, which hopefully will become a habit. A habit that will serve business well in the emerging environment.

Why Cash was King

The preference for cash by small businesses is an old one, and a well-entrenched one. While tax evasion is often invoked as the primary reason for this preference, we should bear in mind that perfectly honest business owners also have preferred to deal in cash, sometimes per force. One of the reasons for the unvirtuous cash cycle is that their expense base is almost exclusively cash based. This incentivizes the business to earn revenue in cash as well.

Cash revenue provided the liquidity to fund expenses and lowered tax incidence, which was balanced by the risk of holding hard currency. Against this, for ‘white’ transactions, there was the cost of compliance, the chance of losing business to cheaper competitors who avoid paying tax, and the invitation to scrutiny. Hitherto the choice between cash and compliance wasn’t a difficult one. This mind-set is changing though; partly by force and partly because it makes good business sense to do so.

While all the cash withdrawal restrictions imposed after 8 November have been lifted, sporadic cash shortages are a reality. As per some press reports, the value of currency in circulation currently stands at around 70% of pre-demonetisation levels. Some analysts speculate that the amount of hard currency has been deliberately kept low by the government with a view towards encouraging digital transactions. With this objective, it may well be that the amount of currency may never exceed 80% of the pre-demonetisation quantum. In that case, many old habits will need to change if business has to continue and grow.

Demonetisation preceded the planned GST implementation date of 1 July by less than 8 months. Both these moves will force a wholesale rethink by participants in the parallel economy. These businesses need to think about first entering the banking system, second digitizing, and third full declaration. Just as organised players bounced back from demonetisation’s paralysing effects quicker, they will also be able to cope better with the changes that GST will bring.

Undercutting legitimate, competitive businesses through lower pricing via cash dealings will probably end or at least reduce. This will improve the overall competitiveness of organised MSMEs generally. Enterprises with proper systems and planning processes will make the transition sooner, giving themselves a tangible advantage compared to unorganised players.

Wage payment is a large cash burner for small businesses and the government is also moving towards encouraging wage payments through banking channels. This serves a dual purpose – the wage paying business establishes a revenue:expense trail and the low wage labour class benefits from financial inclusion.

Going forward, income tax authorities are also likely to intensify efforts to bring businesses into the tax net and scrutinise filings more closely. This will be coupled with making large cash payments illegal, impossible, or very difficult. Hence, for a small business that is forced to disclose all revenue sources, it will make eminent sense to minimise use of cash in cases where the expense is anyway tax deductible. It isn’t all ‘stick’ though; there are ‘carrots’ too. From 2017-18, MSMEs with an annual turnover of ₹50 crore or less will pay a corporate tax rate of 25%, as against 30% for others.

On access to capital, MSMEs that relied on unaccounted cash transactions have always been disadvantaged due to difficulties in accurate credit assessment. If businesses streamline their processes and accounting, and move towards a verifiable digital trail, they will be able to access credit markets more efficiently and at better pricing, thus lowering the interest rates on their business loans. Advisory services of the kind provided by online platforms like Loan Frame will prove invaluable in navigating this new digital age.

Endemic issues need to be addressed

Endemic issues that lead to generation of cash, such as corruption and the high cost of tax compliance, need to be addressed. If these are not part of the reform, India may merely exchange Rs1,000 and Rs500 notes for Rs2,000 notes, which ironically make logistics of cash transactions at least twice as easy!

With formalisation of the economy, MSMEs are now at the crossroads. These reforms could very well uncage the MSME growth animal if it is supported by the spread of digital payment systems and financial inclusion, mechanisms to end corruption, and easier tax compliance. There may just be no good reason to depend on cash anymore.